The origins of Bath Fringe go back to the sideshows which sprang up around important Temple festivals before and during the Roman Occupation, to the street fairs that surrounded the Abbey for the coronation of Edgar in 959… Well obviously we can’t trace that exactly, of course, but it’s worth remembering that Bath has been a town of arts, visitors, travelling performers, even before the Georgian era that our Heritage Industry makes so much of.

It makes more sense to trace the Fringe back to the Bath Festivals of Blues & Progressive Music of ’69 & ’70, but the connections to the current crew are a little tenuous, so let’s say the real start were the Walcot Festivals of the ’70s & ‘early 80s, mostly run by a community group called Bath Arts Workshop – the name still exists for the company that runs the Natural Theatre Company of Bath.

In 2000 we commissioned a project to put some material about these festivals on-line; as I write it’s been made cyber-homeless but we’ll have it up again sometime. These events were inspirational, some of their perpetrators now pillars of the alternative establishment locally and nationally; the  Fringe’s Walcot Nation Day (now sadly in abeyance, see our Walcot page) and our continued Walcot community events are a homage and acknowledgement of how important that all was and is to the Spirit of Festival and to Bath.

Around the end of the Walcot Festivals (things change, people get tired and move on…) it was recognised more widely that there was a great deal that people wanted to experience and celebrate that wasn’t covered by the classical music centred Bath Festival, and a Bath Fringe was set up with the support of the then city council in 1981, with dates related to those of the ‘main’ festival but an independent organisation (Bath Arts Association) and a lively interest in many more artforms. There was financial support, at least for staff, available under various Community Programme initiatives in arts and, ah, community events, but with political shifts and internal developments those resources dwindled over the next decade to the barest handful of events.

A group of local promoters and artists were unwilling to let the idea die, and constituted a new group in 1991 to promote a festival that same year. That group, Bath Fringe Ltd., is a cooperative, and still includes promoters, artists, performers, venue volunteers, and audience members. It was briefly, at council request, funded through Bath Festivals Trust, but the arrangement didn’t work out and the Fringe retained its full independence. Many of the bigger Fringe events have their own dedicated volunteer team and run their own affairs under the Fringe ‘banner’ and couldn’t be done any other way: see other material about FAB Fringe Visual Arts, Fringe Art Fair, Children’s Festival, Bedlam Fair street performance, etc. Local council support has always been part of the picture, although this has got more difficult now councils have less money and more call on it; the festival has also always been equally dependent on sponsorship, outside grants, much volunteer work and local goodwill – this is good for us, it keeps us very connected with our audience and other parts of the community as well as national institutions.

Over the years the Fringe has investigated and developed artforms events and audiences that have in many cases become mainstream, others of which have been taken on and commercialised by other promoters and festivals. ‘Affordable Art’, Spoken Word, Digital Arts & Media, Standup Comedy, Cabaret, Physical Theatre, Circus Arts, Folk & World Music, Latin Dance, Jazz, and the serious presentation of major figures from Pop, Rock and Black Music have all been Fringe centrepieces, some of which have been maintained and others developed elsewhere. That’s part of how Fringes work, and in a good way it gives us space to try and develop new things, even if we have to work the difficult trick of walking away from commercially successful artists and artforms…

You can see some past Bath Fringe programmes elsewhere on this site – click on the years below to see the archived sites (apologies if some links do not work any more): 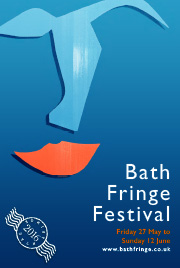 Want to read poems from our Young Person’s Laureate Poetry Workshop? Of course you do! Go to our downloads page and you’ll find some there.
Congratulations to winners Polly Dennyand Sam Wareham Turner.

Almost as good as being there!

How to be in the Fringe

We’re compiling our – oh – generationsof experience in doing Fringe events into online documents. They’re intended to be collaborative efforts: if you think something is wrong or something needs adding, mail us for an invitation to edit. The first one of them is

Information for artists and can be found here

This is followed by Information for Venues, you can find that here

Please help us to improve these documents if you see any gaps, errors, or room for more. We will be developing them as we go, but we’d love it if you could help. Mail us and we’ll wire you in